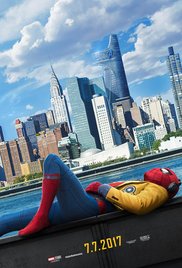 Not recommended under 13; parental guidance recommended 13 to 15 due to violence and scary scenes

The film opens in New York City where we find salvage operator Adrian Toomes (Michael Keaton) and his co-workers collecting all manner of strange alien technology buried amongst building wreckage and debris. Without warning officials from the Department of Damage Control arrive and shut Toomes down, ordering him to hand over all of the salvaged technology. Unhappy with the way they have been treated Toomes and his co-workers decide to keep the salvaged goods and go into business for themselves, making and selling hybrid weapons. Eight years later Toomes has taken his salvaged alien technology to new level, including a suit which enables him to fly as Vulture-Man.

Meanwhile teenager Peter Parker/Spider-Man (Tom Holland) is at a loose end after an exciting time fighting with the Avengers and is waiting for a call from Tony Stark/Iron-Man (Robert Downey Jr.) informing him of his next mission. Peter fights crime and helps people in his local neighbourhood as well as attending high school during the day. At school Peter hangs out with his best friend Ned (Jacob Batalon), is a key figure on the schools quiz team and has a huge crush on popular student Liz (Laura Harrier).

During one of Peter’s night-time neighbourhood surveillance tours, he attempts to apprehend four men using alien weapons to steal an ATM machine. Unfortunately Peter accidentally sets off one of the weapons which destroys an adjacent shop and nearly kills its owner. Peter becomes determined to track down those responsible for the weapons and this leads him to a confrontation with Vulture-Man

The film contains fantasy action violence throughout, some large scale destruction of property, and a violent murder. Minimal blood and gore are depicted.   Examples include:

The film contains sexual reference and innuendo scattered throughout. Examples include:

There are a number of scenes of females wearing tight and revealing clothes, and men’s muscular bodies.

Spider-Man: Homecoming is a superhero action adventure that targets teens and adult fans of Marvel films. Teens are likely to particularly enjoy seeing the teenage Peter Parker. Younger children who like Spider-Man toys and costumes are likely to be attracted to the film, but it is rated M for action violence and features a number of violent and scary scenes. Some parents may also be concerned about the coarse language. The film is therefore not recommended for children under thirteen and parental guidance is recommended for the 13 to 15 age group.

Values in this movie that parents may wish to discuss with their children include courage and perseverance, as shown by Peter Parker who has some big responsibilities for a teenager to deal with.