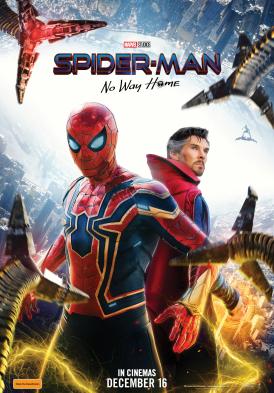 Picking up where the previous Spider-Man film, Far From Home, left off, Peter Parker (Tom Holland) faces the reactions of society to a leaked tape indicating that he, Spider-Man, is responsible for the murder of Mysterio. This instantly throws his life into chaos as well as the lives of his girlfriend, MJ (Zendaya), and best friend, Ned (Jacob Batalon). When all three are refused entry to MIT, Peter takes matters into his own hands and goes to see Doctor Strange (Benedict Cumberbatch), in the hopes that he can go back in time and fix things so that no one need know he is Spider-Man. Unable to do as Peter had hoped, they compromise with a spell that will erase the world’s collective memory, causing everyone to forget who Spider-Man is. When Peter requests some changes mid-spell, something goes wrong with the universe. Suddenly supervillains from alternative dimensions, including: Electro (Jamie Foxx); The Green Goblin (Willem Dafoe); Doc Ock (Alfred Molina); The Lizard (Rhys Ifans); and Flash (Tony Revolari) descend upon Peter’s world, bringing more chaos and wreaking more havoc than Peter could ever have imagined. With the help of MJ and Ned, Spider-Man must capture the supervillains and send them home before they destroy everything that he cares about. The only problem is Peter’s Aunt May (Marissa Tomei), who believes that everyone deserves a second chance and who encourages Peter to help those who cannot help themselves. Believing her to be right, Peter does all he can to transform the destinies of those he once sought to destroy. Unfortunately not all of them want to be helped and some will stop at nothing to remain where they are, feeding on power and fear and destruction. When Peter is broken by the death of a loved one, it is his friends and some unexpected visitors that give him the courage to continue; the ability to choose the hardest path; and the power to make peace with something he should have done in the first place.

Death of a parental figure; The loss of loved ones; Guilt by association; Playing God with the lives of others; The pursuit of power at all costs; Good versus evil.

Spider-Man: No Way Home is an action adventure and is the third Spider-Man movie starring Tom Holland to be released by Marvel Studios. The film is suspenseful, surprising and occasionally emotional. Due to the nature of the film it is not for younger children but one that will be best enjoyed by older teen and adult audiences along with Spider-Man fans.

The main messages from this movie are that ‘with great power comes great responsibility’; that everyone deserves a second chance; and that good deeds send ripples out into the universe, helping and inspiring others along the way.