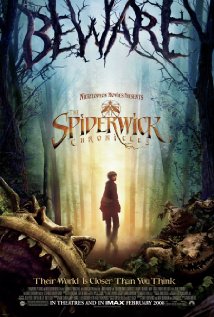 The Spiderwick Chronicles opens in a dark laboratory-like room full of insects. Arthur Spiderwick (David Strathairn) is writing in an old book and is quite obviously frightened.

Eighty years later, a mother (Mary-Louise Parker) and three children arrive at the old house. Mallory (Sarah Bolger), Simon and Jared (twins both played by Freddie Highmore) are not at all happy to be there as they have had to leave their home in New York but it is Jared who seems the angriest. He won’t talk and fights constantly.

When they arrive they find salt on the window sills and the house has strange noises. They find that things go missing and Jared is blamed. Eventually, while trying to find the source of the noises, Jared finds Arthur Spiderwick’s room and in it is the old book written by Arthur Spiderwick called The Spiderwick Chronicles. Although there is dire warning at the start of the book that it should not be read, he reads it anyway.

The book contains secrets about magical and mythical beings and, by reading it, Jared sets off a chain of events that brings out goblins and the ogre, Mulgarath (Nick Nolte). Mulgarath is determined to get the book because it will enable him to become so powerful that he will rule the earth. Jared needs to find a way to defeat the ogre and keep his family, and the world, safe.

The supernatural; family conflict; separation from a parent

Much of the violence in this film is not between people but there are a number of scenes of  violent attacks on the family by mythical creatures and retaliation by the family. Some examples are:

In addition to the above-mentioned violent scenes, there are scenes in this movie that could scare or disturb children under the age of five, particularly those involving computer generated images of fantasy characters. Examples include:

Some mild coase language and putdowns.

The Spiderwick Chronicles is a fantasy adventure featuring computer generated images of creatures such as goblins and ogres.

The movie’s main message is that you should think before you act and speak, making sure that you do not judge a situation or lay blame until you know the whole story

Parents may also wish to discuss the children’s separation from their father and Jared’s reaction to it.