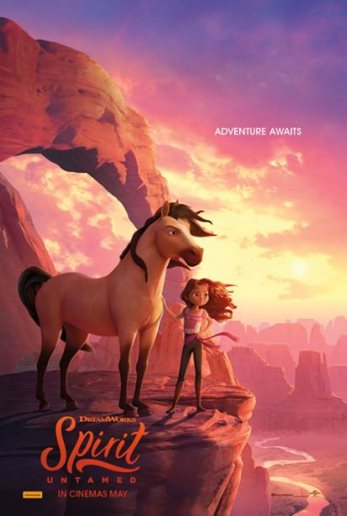 Not suitable under 4; parental guidance to 7 (violence, themes)

Following the death of her mother, Lucky (voiced by Isabela Merced) is sent to live with her Grandfather (voiced by Joe Hart) and Aunt Cora (voiced by Julianne Moore). Lucky grows up in a mansion wanting nothing more than to escape her tutors and run and play with the other children. When she accidentally ruins her Grandfather’s attempt to run for Governor, Lucky is sent back to her father (voiced by Jake Gyllenhaal). On the train, Lucky glimpses a herd of wild horses and is immediately taken with Spirit, the wild mustang leading the herd. When Spirit is captured by rough horse thieves and kept in a nearby corral, Lucky attempts to befriend him, much to her father’s displeasure. With the support of her new friends, Abigail (voiced by McKenna Grace) and Prue (voiced by Marsai Martin), Lucky slowly wins Spirit over and when the rest of his herd is taken by thieves, Lucky and Spirit lead a rescue mission in a daring attempt to get them all back. The journey they embark on will test their strength and force them to face their fears, but it will also reveal the truth of who they really are and all they can accomplish.

Spirit Untamed is an animated adventure from Dreamworks. A prequel of sorts that tells the tale of how Lucky came to the frontier town of Miradero and how she and Spirit became friends. While it may lack interest for older audiences it is suitable for all children except those under 5 and parental guidance is recommended to 7.

The main messages from this movie are to be brave; to stand tall; to believe in yourself; to know who you are; and to never give up.