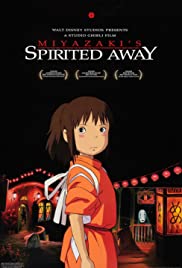 Not suitable under 8; parental guidance to 12 (scary scenes and themes)

Chihiro is a ten-year-old girl who is moving to a new city with her mother and father. On the way to their new house, they take a wrong turn and find themselves at an abandoned and dilapidated theme park, which is a replica of an old-style Japanese village. Even though Chihiro is totally creeped out by this place, her parents are keen to take a look around, so they go exploring. Chihiro’s parents can smell some delicious street food cooking and take a seat at one of the stalls where some tempting food has miraculously appeared. Even though there is no one to serve them, her parents tuck in to the food with great enthusiasm. Chihiro is disgusted and annoyed, heading off down the road and crossing over a river that leads to a grand old bath house. She is just turning around to return to her parents when a boy appears, warning her to get out quickly before the sun sets. Chihiro runs back to find her parents but to her shock and horror she sees that they have been turned into pigs! It is now too late to get back across the river and Chihiro becomes trapped in a world of spirits. The boy reappears and gives her advice on how she can survive in this strange and terrifying spirit world, saying he will help her find her parents and change them back into humans. A surreal and epic adventure begins where Chihiro must secure a job in the big bath house, navigate the many strange characters who wish to do her harm, help her friend Haku, save her parents and return to her human life.

Spirited Away is an academy award-winning Japanese film by acclaimed writer Hayao Miyazaki and animated by Studio Ghibli. Miyazaki created the film specifically to capture the imagination of children in the 10 -13 age bracket, feeling that current offerings for that age group were limited. Spirited Away is a creative and rich feat of storytelling that delves deeply into Japanese Shinto and Buddhist symbolism. Not only is it an epic and surreal adventure, but the animation is detailed and visually spectacular. Due to its extremely complex storyline, long length and scary themes, it is definitely better suited to older children. Younger children may find it simultaneously disturbing and boring!

The main messages from this movie are that greed and consumption lead us away from happiness and that we must fight for what is truly important in life.