Spy Kids: All the time in the world 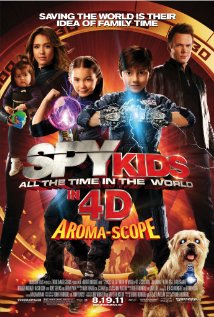 The fourth film in the Spy Kids series revolves around Marissa Wilson (Jessica Alba), a former O.S.S. (Office of Strategic Services) spy, and her life since leaving this American intelligence agency.  For the past few years, Marissa has spent most of her time caring for her baby daughter (Belle Solorzano), alongside the older Rebecca (Rowan Blanchard) and Cecil (Mason Cook), who are children from her husband Wilbur’s (Joel McHale) previous marriage.  Despite every effort on Marissa’s part, Rebecca frequently reminds her that she will never measure up to her dead biological mother.

Marissa’s life changes when she is unexpectedly called back to work as a spy.  Danger D’Amo (Jeremy Piven), who is head of the O.S.S., asks her to find and stop the evil genius known as “The Timekeeper” (also played by Jeremy Piven).  This villain and his protégé “Tick Tock” are plotting to bring about an Armageddon, or end of the world by altering the passage of time.  On returning to the O.S.S., Marissa is reacquainted with original Spy Kids operatives Carmen Cortez (Alexa Vega) and her brother Juni (Daryl Sabara).

At first, Marissa hopes to keep her O.S.S. involvement secret from her family, who have no idea about her past life as a spy.  Unfortunately, Marissa’s mission becomes more complicated when The Timekeeper’s henchmen threaten Rebecca and Cecil.  Marissa is then forced to reveal her real identity to the children, and finally, to her husband.  As events move towards a final battle, the entire family (including their dog, Argonaut (voiced by Ricky Gervais) is drawn into her quest to stop The Timekeeper.

There is repeated physical violence in this movie, some of which is both directed at, and perpetrated by children, including scenes where:

Some potentially disturbing examples of violence are perpetrated by Marissa both when she is in the final stage of her pregnancy and when her baby daughter is strapped to her chest in a baby carry pack.  In the film’s opening scenes, for example, Marissa is depicted beginning labour contractions, and is then involved in a series of fight sequences with The Timekeeper’s henchmen. Later, Marissa faces a similar circle of henchmen while the baby is strapped to her chest.

There is also some verbal violence and verbal descriptions of violence in the film, such as when:

In addition to the above-mentioned violent scenes, there are several scenes in this movie that could scare or disturb children under the age of five, including:

In addition to the above-mentioned violent scenes, there is at least one scene in this movie that could scare or disturb children aged eight to thirteen, wherein:

There are no further scenes in this movie that are likely to scare or disturb children over the age of thirteen.

Some products are displayed or used in this movie, including:

There are some mild sexual references in this movie including:

There are no direct depictions of nudity in this film, however Marissa and Carmen are both frequently shown in very tight, figure-hugging clothing.

There are no direct depictions of sexual activity in this movie, however there are some scenes where Marissa and Wilbur kiss and cuddle.  At the close of the film, they share a long, passionate kiss.

There is some mild coarse and threatening language, and several put-downs in this film, including:

In addition, there are several jokes involving urine, poo, farting, and vomit.

Spy Kids: All the time in the world is a fast-paced children’s science fiction action film that utilises a range of clever special effects.  Its predominant message concerns the importance of restoring damaged family relationships while there is still time to do so.  There is also an emphasis upon reassessing life and work commitments in order to ensure that enough time is spent with loved ones.  However, such positive themes are somewhat disempowered by the continual displays of violence, which produce an equally strong message that conflict is best resolved through aggression and force.

This movie could also give parents the opportunity to discuss the negative outcomes of violence and alternative forms of conflict resolution.