Spy Next Door, The 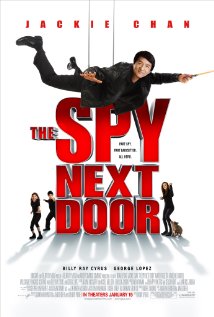 Not recommended under 8, PG to 13 (Themes and violence)

Bob Ho (Jackie Chan) is a Chinese spy who has been on loan to the CIA. He is one of the best in the world and always follows through and completes his missions. He lives next door to a single mum, Gillian (Amber Valletta) with whom he has fallen in love. He decides to retire from the spy game so that they can get married and lead a normal life.

There is however one big hurdle. Gillian won’t marry him unless the children, her teenage stepdaughter Farren (Madeline Carroll), 11-year-old Ian (Will Shadley) and 4-year-old Nora (Alina Foley)) like him and they don’t. He therefore has to find a way of winning both their trust and their affection. When Gillian’s father becomes ill, Bob seizes the opportunity to get to know the children by minding them when she is away. The children, however, have other ideas and make things as difficult as possible.

Bob’s task is further complicated by the fact that a spy whom he has just apprehended has escaped. He is called by the CIA to help but refuses. Ian tries to ‘dig up some dirt’ on Bob to prevent his mum from marrying him. To do this he breaks into Bob’s computer where he downloads what he thinks is a rock concert onto his iPod. It is instead a very secret formula owned by the Russians and they trace the download back to Bob’s house.

Bob now finds himself protecting the children and fighting the Russian spy network at the same time.

Family breakdown; Separation from a parent; the world of espionage

This movie contains frequent martial arts style fighting, which involves kicking and punching and throwing people around, but also guns, knives and a flamethrower. The three child stars are involved in a number of violent scenes, including

Younger children in this age group may find some of the violent scenes, and the situations faced by the children, disturbing.

The Spy Next Door is an action movie aimed at children with a format that will be familiar to adult Jackie Chan fans. In this film the plot has a serious side in that the children are not just involved in adventures, but also have to come to terms with changes in relationships and a new parent.