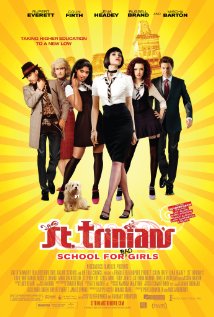 Not recommended under 15 due to themes, drinking and smoking, drug and sexual references.

St Trinians School for girls is notorious for turning out girls fit for a life of crime. New girl Annabelle Fritton (Talulah Riley) is shocked to discover that the school encourages ‘free expression’ which translates into blowing up buildings and making vodka to sell on the black market. Her aunt Camilla Fritton (Rupert Everett), the headmistress, is surprised to meet up with an ex-lover who is now the new Education Minister, Geoffrey Thwaites (Colin Firth). Despite past relationships, Thwaites is determined to close down the school because of its unorthodox teaching methods. In addition, the school is in dire financial trouble.

The girls decide to take it upon themselves to raise the necessary funds by robbing the National Gallery of its famous ‘Girl with the Pearl Earring’ painting. This involves cheating their way to the final of “School Challenge” which is to be held in the National Gallery.

There is some violence, mostly slapstick, in this movie including:

St Trinians is a modern film version of the comic books by Ronald Searle. It is likely to have some appeal to adolescent girls.

As this film is a comedy about girls behaving badly there are likely to be few values that parents would want to promote. Parents may, however, wish to discuss the real life consequences of the criminal behaviour and substance use seen in the film.