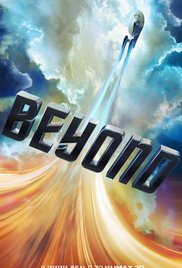 Not recommended under 12, parental guidance recommended 12 to 14 due to violence and disturbing scenes and characters.

The crew’s R&R is cut short when a strange alien arrives in a damaged ship. We learn that the alien, along with her crew, crash-landed on a planet deep within an uncharted nebula and that the crew are marooned and in dire need of rescue. As the Enterprise is the only ship advanced enough to be able to navigate the nebula, Kirk is given the mission of rescuing the stranded aliens.

We learn the individual responsible for the attack is a vengeful alien called Krall (Idris Elba). Krall believes that Kirk holds in his possession an alien artefact which Krall is keen to retrieve. Apparently the artefact is a key to a weapon of mass destruction which Krall intends to use to destroy the Federation. Krall’s first intended target is Yorktown.

With the help of an alien freedom fighter named Yaylash (Sofia Boutella) Kirk must find a way to stop Krall.

A man is attacked by an alien creature which charges at him, biting and clawing at his neck and clothing. More of the creatures charge the man and swarm over him, clinging on to his legs, arms and torso as he attempts to throw them off.

Children in this age group are also likely to be disturbed by the above-mentioned violence and scary scenes and characters.

Nothing of concern in the film but associated merchandise is likely to appeal to children.

There occasional use of substances in this movie, including:

The film contains mild coarse language and mane calling scattered throughout. Examples include:

Star Trek: Beyond is a science fiction action adventure targeting adolescents and adults, particularly those who are fans of the Star Trek TV series and films. This film is a return to the original characters of the 1960’s TV series and fans will not be disappointed.  The sometimes intense violence and scary characters make the film unsuitable for children under 12 and parental guidance is recommended for viewers up to the age of 14.

Values in this movie that parents may wish to reinforce with their children include self-sacrifice and teamwork.