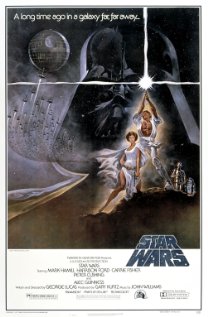 Not recommended under 8, PG to 10, Violence and scary scenes

This is the original Star Wars film from 1977, which was re-released with a subtitle after the release of two sequels and three prequels.

The Galaxy is in the control of the Empire under the influence of the dark side of the force. It rules with an iron fist and has created a starship called the Death Star, which has the capacity to wipe out an entire planet with just one strike. The rebel forces decide to strike back and under the command of Princess Leia (Carrie Fisher), they steal the plans of the Death Star to examine it for any weaknesses.

The Imperial forces attack the rebels’ ship and capture Princess Leia.  However the Droid R2D2 (Kenny Baker) manages to escape the ship with the plans and another robot C-P30 (Anthony Daniels). They land on a planet where they come into the possession of Luke Skywalker (Mark Hamill), a boy who’s been living with his Aunt and Uncle since his own parents died. R2D2 explains that he must find Obi Wan Kenobi, one of only two remaining Jedi knights, to rescue the princess from a certain death. Luke sets out to find Obi Wan Kenobi (Alec Guinness) who understands the danger and wants to recruit Luke into the arts of the Jedi in order to help. Luke is reluctant, but when he returns home he finds his uncle and aunt have been killed by the imperial forces looking for R2D2.

Luke knows he must join with Obi Wan Kenobi to fight the dark forces and together they set out on a dangerous mission to rescue the Princess. They recruit Han Solo (Harrison Ford) to fly them to Anderaan with Chewbacca (Peter Mayhew) as co-pilot. The group is relentlessly pursued by the imperial forces which leads to a great battle where they manage to rescue the Princess. They have very little time, however, to save more of the Galaxy from being destroyed by the Death Star.

Good versus evil; Loss of parents; Search for identity

Star Wars Episode IV: A new hope is a classic science fiction movie. Although the graphics are not as good as today’s standards, it is still an exciting adventure story that older children will thoroughly enjoy.

The main messages from this movie are that good triumphs over evil and that you have to fight for what you believe in.