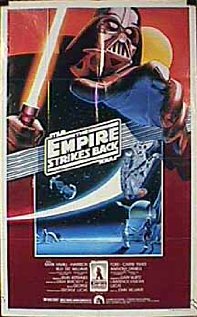 Not recommended under 10, PG to 13 (Violence; scary scenes)

The rebels are stationed on the ice planet of Hoth but it comes under attack from the Imperial forces. Han Solo (Harrison Ford), Princess Leia (Carrie Fisher) and Chewbacca (Peter Mayhew) manage to escape in time in the Millennium Falcon. Luke Skywalker (Mark Hamill) is, however, instructed by Obi Wan Kenobe (Alec Guiness) that he must travel to Dagobah to receive training from the Jedi master Yoda (voice of Frank Oz).  Yoda is a small creature, not quite what Luke was expecting, but with great powers which he patiently tries to teach Luke to use.

Meanwhile Han and Princess Leia land on Bespin where they are taken in by an old friend Lando (Billy Dee Williams). Lando unfortunately betrays them to the Empire who captures Han and Princess Leia and take them prisoner. Luke realises his friends are in trouble and leaves Dagobah to rescue them. He finds himself in much greater difficulty than he expected when he comes face to face with Darth Vader (David Prowse).

In addition to the above mentioned violent scenes, there are some scenes in this movie that could scare or disturb children under five, including:

Some mild name-calling such as “fuzzball” and “nerf herder”

Star Wars Episode V - The Empire Strikes Back is quite an intense movie and darker than the original Star Wars film. As the story unfolds it reveals more of the plot which has quite sinister undertones. However, it is another science fiction classic that will greatly appeal to older children and adolescents.

The main message from this movie is that you should not allow yourself to be overcome by evil and should remain true to your beliefs.

This movie could also give parents the opportunity to discuss with their children attitudes and behaviours, and their real-life consequences, such as their own beliefs are about good and evil, and the use of force to defend one’s beliefs.