Star Wars Episode VI: The return of the Jedi 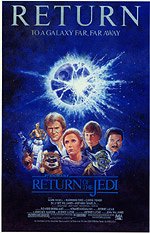 Not recommended under 8, PG to 13, Violence and scary scenes

Luke Skywalker (Mark Hamill) returns to his home planet to rescue Han Solo (Harrison Ford), who is still frozen in carbonite, from the monstrous Jabba the Hut (voice of Larry Ward). Meanwhile Princess Leia (Carrie Fisher) and Lando (Billy Dee Williams) also mount their own rescue plan. The three eventually manage to escape with Han and destroy Jabba’s palace in the process. It is then that they learn that the Galactic Empire has almost completed a new death star, far worse than the first. They travel to Endor to demolish the shield that is protecting the death star so that they can destroy it.

On Endor they encounter the Ewoks, furry little creatures that live like primitive tribesmen. The Ewoks at first are defensive towards the newcomers but when they realise their plan they join with the rebels to destroy the Empire’s death star. Meanwhile Luke, now almost a full fledged Jedi, has to confront his father to complete his mission.

Jabba the Hut’s harem is made up of scantily clad women in a state of servitude.

Star Wars Episode VI - The Return of the Jedi is the final episode of the original Star Wars Trilogy. It reaches its conclusion in an intense climactic battle between good and evil forces. The Star Wars Trilogy is classic science fiction and a great adventure series for older children and adolescents.

This movie could also give parents the opportunity to discuss with their children attitudes and behaviours, and their real-life consequences, such as their own beliefs are about good and evil and the use of force to defend one’s beliefs and to oppose evil.