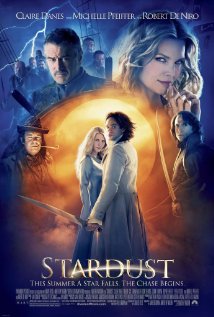 Not recommended under 8, PG to 13 (Violence, scary scenes and supernatural themes)

Young adventurer, Tristan (Charlie Cox), pursues a falling star to bring back to his beloved, Victoria (Sienna Miller), by stepping through the wall that protects his named village, named  Wall from the supernatural universe, Stormhold on the other side.  The star is not what he expects. He finds it in human form, now a beautiful woman named Yvaine (Claire Danes). She has been struck down from the heavens by a ruby necklace belonging to Stormhold’s dying King (Peter O’Toole).

The king’s surviving sons, Primus (Jason Flemyng) and Septimus (Mark Strong), pursue Yvaine for the ruby, whilst the witches Lamia (Michelle Pfeiffer) and her sisters also want Yvaine for her heart and its eternal properties.  During the journey back to Wall and Victoria, Tristan and Yvaine encounter friends and enemies, as well as the meaning of love.  The final dual with the evil Lamia ends in a destiny beyond Tristan’s imagination.

The supernatural, Captivity and slavery

Stardust is a fantasy adventure movie based upon the illustrated novel by Neil Gaiman.
The main messages from this movie are about the importance of ambition, love, bravery, loyalty and dedication to a cause.