Step up: All in 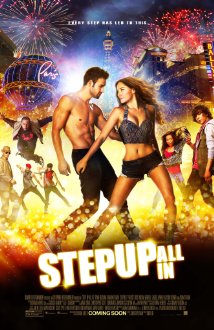 Step up: All in is the fifth film in the Step up dance movies franchise. Sean (Ryan Guzman) and his dance crew ‘The MOB’ are struggling to make a living in Los Angeles. The MOB decide to move back to Miami but Sean decides to stay in LA and pursue his dancing. Sean and his friend Moose (Adam Sevani) decide to form a new dance crew called LMNTRIX and compete in a reality television show for the chance to win a three year dance contract in Las Vegas. Familiar faces from past Step up films, such as Andie (Briana Evigan), join the new dance crew.

While competing in Las Vegas, LMNTRIX faces many challenges, such as threats from rival crews, cheating and the resurgence of The MOB. Through these challenges the crew must learn to work together and trust each other if they are to succeed.

Step Up: All in is the 5th film in this series. It is an energetic dance film about working hard to follow your dreams, but also about learning to value friendship over success. The film is not recommended for children under 12, with parental guidance recommended for 12 to 14 year olds. Younger children may be scared by some scenes and parents may be concerned by the sexual references, coarse language, gambling and substance use in the film. This film is likely to appeal to fans of the series, and other teen and adult viewers who enjoy watching energetic dance sequences.

Parents may also wish to discuss the real-life consequences of gambling.