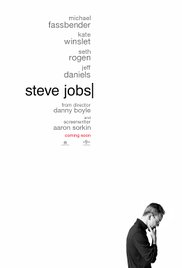 Not recommended under 15 due to themes, emotionally intense scenes and coarse language.

The film Steve Jobs (2015) is a biopic about the co-founder, chairman, and chief executive officer of Apple computers.

The film opens with the 1984 launch of the Macintosh computer where we find Steve Jobs (Michael Fassbender), Joanna Hoffman (Kate Winslet) head of marketing and co-Macintosh inventor Andy Hertzfeld (Michael Stuhlbarg) gathered around a giant projector screen arguing about why the demonstration compute won’t say “hello” when turned on. The heated argument that follows gives an insight into the character of Steve Jobs.  He is a somewhat scary dictator, who won’t take “no”, or “it can’t be done” for an answer, who will not be late for any reason, and who refuses to acknowledge the existence his own daughter.

The film that follows gives a backstage focus on Steve Jobs as he presents the launch of three of Apples iconic products over a fifteen year period, including the Apple Macintosh, the NeXT cube and the iMac. Through an exposé of his life we learn that Jobs while a genius and visionary was also a very complicated man who found it challenging to work with others and was emotionally damaged as a result of being abandoned as a child. The film follows Steve turbulent relationships with his daughter Lisa Brennan as she grows up, and Lisa’s mother Chrisann Brennan (Katherine Waterson).

The violence in this movie is mainly verbal, most of it in the form of intense arguments including:

Children in this age group may also be disturbed by the above-mentioned scenes and themes.

Younger children in this age group may also be disturbed by the above-mentioned scenes and themes.

The film contains some strong language throughout and infrequent name calling. Examples include:

Steve Jobs is a dramatic biopic following a turbulent high-powered career which is aimed at adult viewers. The film is fast paced, entertaining and at times emotionally intense (particularly when the film paints an unflattering image of Jobs as a father). The themes, coarse language and intense verbal arguments make the film unsuitable for children under 15 but the subject matter raises interesting issues for discussion with older teens who are likely to be interested in the career of a high-profile computer genius and the man behind the public image.