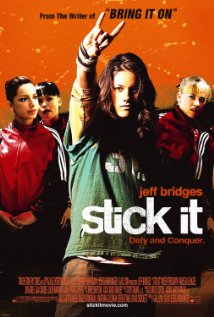 Hayley Graham (Missy Peregrym) was a former top gymnast, whose career and ambitions fell apart when her family did. Hayley chose instead to rebel against her long suffering father and the law, frequently engaging in dangerous activities and pushing the boundaries. Her most recent escapade with her friends (riding bikes through a construction site and causing property damage) lands her in trouble with the police and in front of the Juvenile Courts. Her punishment is a choice of doing time or attending the Vickerman Gymnastics Academy (VGA). Despite her protests, she finds herself re-joining the world of competitive gymnastics.

At VGA, she meets head coach, Burt Vickerman (Jeff Bridges), and immediately sets about sabotaging any attempts by him to get her training in a disciplined manner. She also finds herself at odds with rest of the gym team, because of the reputation she gained from dropping out of the national gym squad years previously. Although her main aim is still to get out of VGA, as time goes by, Hayley finds herself making friends with some of her team mates and facing up to her previous disappointments.

Children aged eight to thirteen, could be concerned by the scenes where Hayley and her friends ride their bikes in a dangerous manner, and when they fall off the gym equipment.

There is one sexual reference in this movie made when the girls enter the competition hall, and notice a car of young boys and girls. One of the gymnasts asks in reference to the girls in the car “What do they have that we don’t have?”, to which the reply is “boobs”.

There is one scene in which the coaches are shown drinking alcohol in a bar.

Stick It is a is a tale of redemption, in which a rebellious young girl puts aside the obstacles life has dealt her to accept the challenge to succeed, in this case, in gymnastics. While the movie takes some time to establish its premise, the target audience of young girls (particularly gymnasts) will enjoy the action and rivalry of competitive gymnastics. Adults may also enjoy the scenes of competition and the choreography and style in which this action is depicted, however the surrounding scenes, in which characters are developed, are less effective.

The main messages from this movie are about overcoming one’s personal demons and other people’s expectations to achieve one’s best. It also about being competitive in a fair and honourable way, with respect for your opposition.
Values in this movie that parents may wish to reinforce with their children include: