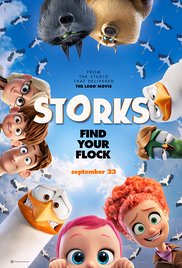 Not recommended under 6; parental guidance recommended 6 to 8 due to violence and scary scenes.

Storks used to be responsible for delivering babies all around the world, but these days, it's more profitable and reliable for them to just deliver parcels. Babies are risky business!

At cornerstore.com, a huge offshore delivery company run by storks, an up and coming corporate climber, 'Junior' (voice of Andy Samberg) is looking forward to promotion. The only catch is that he has to find a way to fire the company's only human employee, the calamitous orphan Tulip (voice of Katie Crown).

Junior's chance at a promotion is jeopardised when Tulip accidently turns on the ancient baby-making machine and creates the first baby that the company has made for decades. Junior thinks that the best way to deal with the situation is to deliver the baby as quickly as they can without letting his boss find out. A wild adventure follows which sees Junior and Tulip form a strong friendship while on their perilous journey to deliver the baby. Meanwhile, head boss of cornerstore.com, Hunter (voice of Kelsey Grammer), has discovered their baby delivery plan and plots to sabotage their efforts.

The question of where babies come from; the importance of family; being an only child; being an orphan; adoption; friendship

In addition to the above-mentioned scenes and scary visual images, there are some scenes in this movie that could worry children aged five to eight, including the following:

Ther is nothing likely to disturb this age group

One of the characters is in a sauna and when he steps outside his towel falls off. The bottom half of his body is seen as a blur.

There is some mild coarse language and insults in this movie, including:

Storks is a fast-paced comedy adventure which is sweet, silly and sometimes very funny. The film is not recommended for children under 6 and parent guidance is recommended for 6 to 8 year olds due to violence and scary scenes.  There is some humour targeted towards older viewers, and children may be puzzled and ask about how babies are really made.

The main messages from this movie are the value of childhood and the importance of friendship and family.