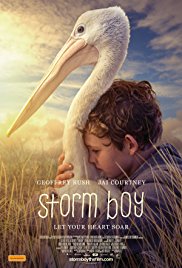 Not recommended under 10, Parental guidance to 13 (mild themes, occasional language).

Following the death of his wife and daughter, ‘Hideaway’ Tom (Jai Courtney) takes his young son Michael (Finn Little) to live in a shack by the beach. He is unable to face people or deal with his grief, so he shuts them both off from the world. Whilst exploring the sand dunes, Michael makes a friend of sorts in ‘Fingerbone’ Bill (Trevor Jamieson) and when he happens upon a nest of new born pelicans whose parents have both been killed by hunters, he vows to save them. Things look grim for the birds, especially the smallest one, but Michael cares for them and goes to extreme measures to keep them safe. Little by little they grow and thrive and a special bond develops between Michael and Mr Percival, the one whom no one believed would survive. The bird seems to sense that it owes its life to Michael and develops a special attachment to him that his pelican brothers Mr. Proud and Mr. Ponder do not. Michael trains the birds to fly, teaches them to fish, and ultimately sets them free. Despite his freedom, Mr. Percival returns, and he and Michael are inseparable devoted friends. When Mr. Percival suddenly becomes a local hero, a series of events are set in motion and Michael finds himself leaving his father, his home and his heart behind. He returns to the remains of the shack many years later as the well-to-do Mr. Kingsley (Geoffrey Rush) with his granddaughter Madeleine (Morgana Davies) to whom he has been recounting his own life story. He hopes that by sharing his past with her that history will not repeat itself and that his experiences will help her find her own way in a world far more complicated than it should be.

Death of parents; death of a spouse; death of sibling; death of daughter; cruelty to animals.

Aside from the above mentioned scenes there is nothing in this film that would frighten children between the ages of eight to thirteen.

Storm Boy is an Australian drama based on the book by Colin Thiele. It is a touching tale of love and loss and hope. It will appeal to a wide variety of audiences and has lessons for every age.

The main messages from this movie are to trust your heart, treasure your family, and to stand up for what is right and what you believe no matter what anyone else thinks.