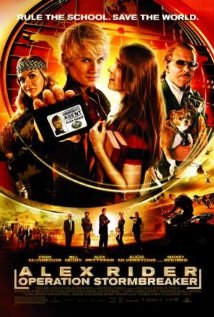 Based on the Anthony Horowitz series, Stormbreaker is a ‘James Bond’ for teenagers where a teenager is the hero. Alex Rider (Alex Pettyfer) is an orphan who is brought up by his Uncle, Ian Rider (Ewan McGregor) and his housekeeper Jack Albright (Alicia Silverstone). His uncle is rarely home and therefore he relies mainly on Jack. Alex believes his Uncle has a boring job in a bank. In reality Ian Rider is a spy for MI6. This job gets him killed.

At his uncle’s funeral, Alex is confused by the number of people around who are carrying guns and by the behaviour of his uncle’s work colleagues. As they leave the cemetery, Jack notices a van taking all Ian Rider’s belongings. Alex chases this van and what happens next eventually leads him into MI6 where he is coerced into following his uncle’s footsteps by becoming a spy.

His job is to infiltrate the headquarters of the computer magnate Darius Sayle (Mickey Rourke) who is planning to donate his supercomputer ‘Stormbreaker’ to every British school. MI6 suspect his generosity and believe he has an ulterior motive. It is up to Alex to find out what is truly going on and ultimately stop Darius Sayle’s unpleasant plan.

Crime-fighting, Death of a family member

All of the above scenes may worry children aged five to eight and in fact could pose more of a problem than the under five age group as they are more likely to understand the consequences of  the death of Alex’s uncle. They may find Nadia Vole and Mr Grin even more frightening, not just because of their appearance but also due to their behaviour.

Children aged eight to thirteen, particularly those closer to the age of eight years could be disturbed by some of the above mentioned scenes.

It is unlikely that any scenes in this movie would scare or disturb children over the age of thirteen.

Stormbreaker is a classic action thriller genre where the ‘good guys’ beat the ‘baddies’ in the end. Values in this movie that parents may wish to reinforce with their children include: