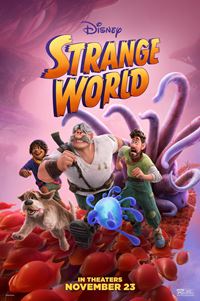 The land of Avalonia is surrounded by the tallest, most impenetrable mountains. No one has ever gone over them and no one knows what lies beyond them but famous explorer, Jaeger Clade (voice of Dennis Quaid), is determined to find out. Jaeger organises a mission with a group of highly trained individuals, including Callisto (voice of Lucy Liu) who later becomes the leader of Avalonia and his own teenage son, Searcher (voice of Jake Gyllenhaal). After a disagreement in the mountains, Jaeger abandons the group, sets off alone and never returns. Meanwhile, Searcher discovers a revolutionary plant, called Pando, which turns out to be capable of powering the entire land of Avalonia. Years later, when a strange disease begins to ravage Pando’s root system, Searcher sets off to help Callisto and her crew discover the cause. Inadvertently joined by his wife Meridian (voice of Gabrielle Union) and son Ethan (voice of Jaboukie Young- White), Searcher and the rest of the expedition soon find themselves in a strange new land, far beneath their beloved Avalonia. This new world is filled with danger and mystery and more than one shocking discovery. This crew will need to make some serious decisions, as more than just the future of Pando is at stake.

Environmental catastrophes; Dysfunctional relationships between family members; Homosexuality; The health and wellbeing of people and planets.

Strange World is an animated, sci-fi adventure from Disney studios. The film contains powerful lessons about ecosystems, the importance of living in harmony with the natural environment and reversing any damage that may have been caused. Best suited to families with children over 5, with parental guidance to 8.

The main messages from this movie are that we shouldn’t seek to make our children become exactly like us (they will have their own dreams and their own paths to follow); and that everything in the natural world is somehow connected – you cannot damage one part without other parts also being affected.