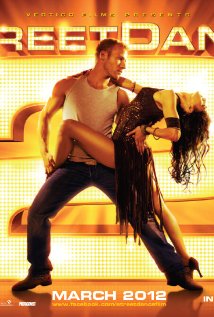 Not recommended under 8 (Lacks interest) PG to 13 (Theme, sexual references)

After suffering a humiliating defeat by the current reigning InvinciblesStreet Dance crew Ash (Falk Hentschel) decides to quit dancing. He is approached by Eddie (George Sampson) to form a new crew and have another go at a challenge. Ash takes some persuading but eventually agrees to gather a crew together from the best street dancers in Europe. He feels that he needs to do something completely different to win the challenge and when he sees Eva (Sofia Boutella) performing a very sexy salsa dance, realises this is the idea (and the girl) that he’s been looking for. His vision is a fusion of Latin and Street Dance but his crew needs some persuading.

In addition to the above mentioned violent scenes children under eight may be disturbed by scenes when Uncle Manu has a heart attack and is shown in hospital attached to life support.

Streetdance 2 3D is a dance movie with some great Latin and Street Dance moves that dance fans will enjoy. The appeal is fairly limited however, as while there is an inevitable touch of romance, the storyline is limited. Parents of younger children may be concerned about them watching scenes of young women involved in provocative, sexy dancing.

The main message from this movie is that it is necessary to overcome fears and failure to succeed in your desires.