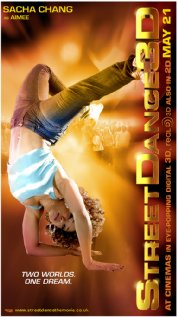 Carly (Nicola Burley) is living her dream and taking her street dancing crew to the UK championships. She is devastated when her boyfriend Jay (Ukwele Roach) quits the crew and breaks up with Carly as well, claiming he needs time out. Carly is determined to get her crew to the finals, but lacks funds and rehearsal space. Consequently she accepts an offer of dance floor space on the condition she includes a group of ballet dancers. The collision between the two groups is not just about dancing style and they have to overcome much prejudice to work together.

Apart from the violent scenes listed above, there are no additional scenes that are likely to disturb children in this age group.

Apart from some of the violence listed above, it is unlikely that anything in this film will disturb children in this age group.

Apart from some of the violence listed above, it is unlikely that anything in this film will disturb children in this age group.

Streetdance 3D is a dance movie that exhibits lots of hip-hop dance talent from the UK. The 3D effects don’t add a lot to the movie but there are some great dance sequences. It lacks interest for younger children but dance fans will enjoy this movie.

The main messages from this movie are that great things can be achieved when people can overcome prejudices and work together.