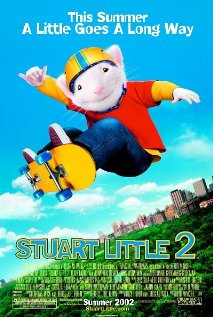 Stuart Little (voice of Michael J. Fox) is a talking mouse who lives as if he is a human member of the Little family, father Frederick (Hugh Laurie), mother Eleanor (Geena Davis), brother George and baby sister Martha. Stuart is keen to prove himself and feels frustrated by his mother’s protectiveness. One day on the way home from school in his miniature red sports car an injured bird Margalo (voice of Melanie Griffith) falls into the car. A large falcon, Falcon has been chasing her and continues to chase them until they get safely home.

Margalo is welcomed into the Little home and Stuart and she become close friends. It is revealed, however, that Margalo and Falcon work together as con artists, and Margalo is forced by Falcon’s threats to betray her new family and steal Eleanor’s precious ring. Not realising this, Stuart thinks Margalo is in danger and sets off with Snowbell, the family cat, to rescue her. The two friends are often in great danger, but eventually find Margalo who helps them attack and defeat Falcon and returns the ring to Mrs Little.

Margalo apologises to the Little family and is forgiven, then fulfils her dream of migrating south with the other birds.

There is some violence in the movie, including:

There are a few scenes which may scare very young children:

Younger children in this age group may be scared by the above mentioned scenes.

Because of the unreality of the characters and situation, older children are not likely to have a problem with the movie.

There is no substance use.

There is no course language.

The take home message of the movie is that friendship and loyalty can triumph over evil. Another message is that you can achieve what you want to, no matter what the obstacles. “You are as big as you feel.”

The issues of lying and stealing are addressed, although simplistically resolved without real consequences.

There are quite a bit of ‘bathroom humour’ (references to litter trays and so on) which many children will find amusing.