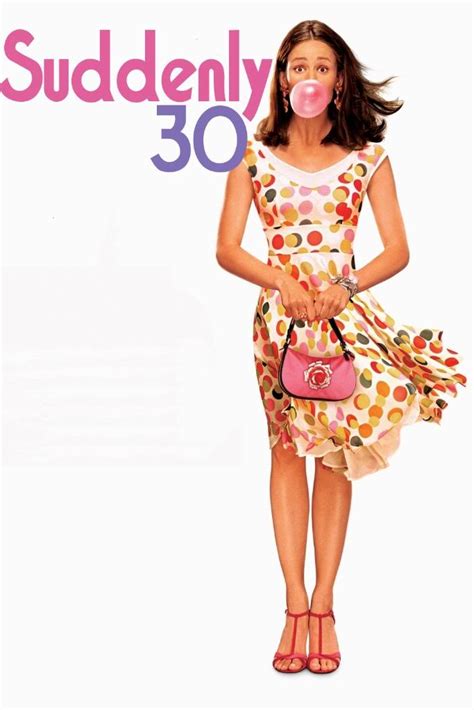 Jenna Rink is trying really hard to be ‘cool’ at school and longs to be one of the ‘Six Chicks’ and befriend Lucy, the leader. When Jenna’s 13th birthday comes round she invites Lucy and the Six Chicks along with the ‘cool guys’ to her party. Jenna really likes Chris Gandy but her real friend is Mattie who has made her a beautiful doll’s house for her birthday. The party ends in disaster when Lucy plays a mean trick on Jenna and they all leave the house to go somewhere where there is beer. Forlorn, Jenna goes to bed wishing she was thirty but is unprepared when she awakens the next morning to find her wish fulfilled.

Jenna now finds herself living with her boyfriend Alex, a self obsessed hockey player for the New York Rangers and she as a successful editor of Poise Magazine, with Lucy as her assistant. However she is dismayed to learn that she has grown into a person who is not very nice, who has few real friends, is estranged from her parents and from Mattie, two timing her boyfriend and overly ambitious at the expense of loyalty and personal ethics. Looking at her adult life through the eyes of a thirteen year old Jenna realises her life has not turned out the way she thought it would.

She tries to rekindle her friendship with Mattie and restore her relationship with her parents. Jenna is disappointed to discover that Mattie is engaged to be married, however and that she has obviously deeply hurt him in the past. Nonetheless Mattie still cares for Jenna and Jenna now finds herself wanting to go back to being thirteen to make amends for all the mistakes she’s made.

There is no violent material in this movie.

Children over the age of five would not be scared by anything in this movie.

Children over the age of eight would not be scared by anything in this movie.

Children in this age group would not be scared by anything in this movie.

Children in this age group would not be scared by anything in this movie.

There are some sexual references:

There is some drinking of alcohol at a work function and at home. The girls at Jenna’s 13th birthday say they want to go off to find beer; there’s also mention of drugs.

There is some coarse language:

The take home message of this movie is the comparison between the simplicity of childhood and the complexity of adulthood and how the innocence of childhood can so easily be corrupted.

Values parents may wish to discourage include thirteen year olds going out to find beer.