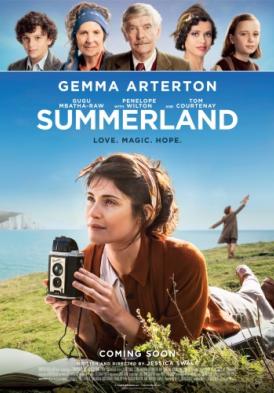 Not suitable under 12; parental guidance to 13 (adult themes, scary scenes)

Set during WW11, Alice Lamb (Gemma Arterton) lives a reclusive life on the clifftops of Dover. She is researching folklore and mythology, in particular, a place called Summerland, which is a ghost island where pagans believe those who die go to. As a single woman, Alice is ostracised by the local villagers and children, who think she is a witch.

Alice's solitary life is thrown into disarray when a ministry official arrives on her doorstep with a child called Frank (Lucas Bond), an evacuee from London. Alice at first refuses to accept the boy but is persuaded to keep him at least for a week until alternative arrangements can be made. Alice is very aloof with Frank, who attends the local school and befriends a girl called Edie (Dixie Egerickx), an evacuee like him. As the week passes, Alice and Frank become friends with Frank patiently waiting for any attention he can get.

Alice decides to let Frank stay with her and over time Frank manages to prise out of Alice why she lives alone. It seems she once had a love of her life named Vera (Gugu Mbatha-Raw), who ended their relationship in order to have a family of her own. It was also very difficult to maintain a same-sex relationship at the time and Vera didn't want to spend her life hiding who she was. This left Alice broken-hearted and an embittered woman. With Frank entering into her life, Alice discovers some joy and pleasure. She also discovers much more than she thought she ever would.

Same-sex relationships; War; Death of a parent; Mythology and Folklore.

In addition to the above-mentioned violent scenes, there are some scenes in this movie that may warrant a discussion with children over the age of thirteen, including the following:

Summerland is a drama set during WW11 about love, loss and grief. It is beautifully filmed and well scripted. It portrays how people who are different from others are often ostracised and feared for no reason. It is a very emotive film and quite intense at times. Due to the adult themes in the movie, it isn't suitable for under 12's and parental guidance is recommended for children aged 12 – 13 years old.

The main messages from this movie are that people who hold different views and opinions shouldn't be feared or excluded and that love is better than bitterness.