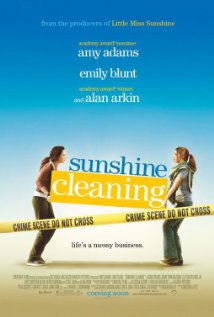 Rose Lorkowski (Amy Adams) is an insecure single mother who used to be the most popular girl in her high school but now cleans houses for a living. She is having an affair with her high school sweetheart Mac (Steve Zahn) who has been married for ages and has no intention of leaving his wife. Rose is disillusioned with her life and dreams of marrying Mac and becoming a real estate agent. When her son Oscar (Jason Spevack) is expelled from his public school and private schools are the only option, Rose must find a way to make some money fast. She turns to Mac who, as a detective, links her with some crime scene clean ups. These are messy and grotesque, but the money is good and Rose enlists her unreliable sister Nora (Emily Blunt) to help in order to get them done.
They bumble their way through their first couple of jobs, but then get some advice and assistance from Winston (Clifton Collins Jr.) a cleaning product salesman. Business begins to take off and Rose begins to get used to the stench and brutality of the work that they do, even seeing it as a source of pride that they are able to help other people in dreadful situations.
When an accident threatens their business Rose’s father Joe (Alan Arkin) makes a huge sacrifice in order to see her succeed where he had failed.

Sunshine Cleaning is a drama featuring believable performances and some disturbing realities. It is inappropriate for children but may be of interest to mature audiences.
The main messages from this movie are that even in the darkest situations there can still be light; even when surrounded with violence and grief there can still be kindness and compassion. You just have to know where and how to look.
Values in this movie that parents may wish to reinforce with older adolescents include: