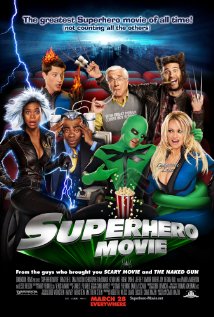 Not recommended under 15 due to crude sexual references and situations, violence, drug references, and coarse language

Rick Riker (Drake Bell), a somewhat nerdy teenager, lives with his Aunt Lucille (Marion Ross) and Uncle Albert (Leslie Nielsen) and travels to school every morning on the school bus with his best friend Trey (Kevin Hart). Rick has a severe crush on Jill Johnson, (Sara Paxton), who lives next door and is the most popular girl in school. However, Jill already has a boy friend, the school’s star football player Lance Landers (Ryan Hansen), a not so nice rich kid who bullies Rick on a daily basis. During a school science field trip to a genetics-engineering lab owned by Lance’s Uncle Lou Landers (Christopher McDonald), Rick is bitten on the neck by a genetically modified dragonfly and is bed ridden for several days. When Rick recovers he finds that he has been transformed and now possesses superhuman powers.

It takes time for Rick to adjust to his new powers and he gets into some sticky situations at school as a result. Before long Rick is approached by Professor Xavier (Tracy Morgan) and taken to a Superhero School where he gets some pointers from X-Men and Fantastic Four superhero types including Stretchy Boy, Sneezo, Wolverine and The Human Torch. Rick takes on the superhero identity of Dragonfly and engages in life and death struggles to protect the weak from the city’s villains.

Superhero Movie contains comedy and slapstick violence and accidental harm. While the violence is mainly free of blood and gore, there are a couple of instances of gruesome horror-like images. Examples include:

Superhero Movie contains some drug reference and use. Examples include:

There are coarse language and put-downs in this movie, including:

Superhero Movie is a crass comedy that parodies a number of superhero films, but is little more than a collection of short jokes and gags. Most of the film’s humour relies on crude sexual references and situations.

Other than good triumphing over evil, Superhero Movie has little to offer in terms of worthwhile messages, but if one was to be extracted from this film it would be that helping others is what makes a real hero.

Parents who allow their children to see the film may wish to discuss the film’s portrayal of sexual relationships and the finding of humour in topics such as paedophilia and disability.