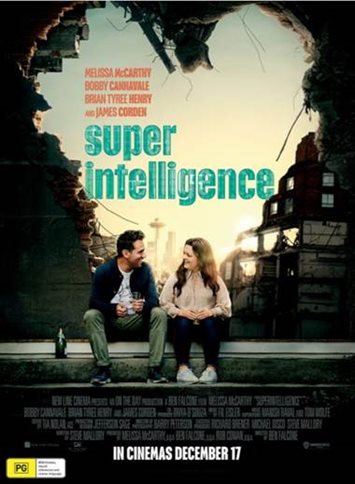 Not suitable under 10; parental guidance to 12 (themes, sexual references and lack of interest for younger viewers)

Carol Peters (Melissa McCarthy) is an unemployed, average woman who has separated from her partner, George (Bobby Cannavale). Carol's life is drastically changed one day, when an all-powerful, all-knowing, super intelligence (voice of James Cordon) enters her life. The AI suddenly fills Carol's life with wealth in the form of a penthouse apartment, a Tesla car, a great job and money in the bank. The AI is determined to reunite Carol with George, however, its main task is to determine whether humanity is worth saving. The AI tells Carol that she has three days to prove to him whether humanity should be saved, enslaved or destroyed. This sets Carol on a frantic path to try to get back together with George. She soon discovers that she is also being watched by the American Secret Services and has to make decisions which will affect the outcome of life on Earth.

Superintelligence is a romantic comedy/spy movie which is quite funny and entertaining. There are the usual slapstick scenes done for a laugh and the plot isn't too serious and therefore not threatening. (However, it is a warning about the impact of AI on society.) The romance between George and Carol is sweet and endearing but the movie is more geared toward tweens, teens and adults. It is therefore not suitable for under 10's and parental guidance is recommended to 12.

The main messages from this movie are that sometimes you must make difficult choices in life and that love will help to make the right decisions.