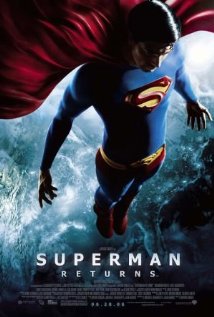 After scientists discover traces of his homeland, Superman (Brandon Routh) goes on a personal odyssey to find Krypton. He returns five years later, with a clearer understanding of his purpose, to a much changed world, in as much in need of his help as ever before. Lois Lane (Kate Bosworth) is now a Pulitzer prize winning journalist, and is engaged to Perry White’s (Frank Langella) nephew Richard (James Marsden). She also has a young son, Jason (Tristan Lake Leabu). Superman discovers that his alter ego, Clark Kent, has only been missed by Jimmy Olsen at his former workplace, The Daily Planet.

In the meantime, Lex Luther(Kevin Spacey), who during Superman’s absence got out of jail on a technicality, has been busy using technology from Krypton to harness energy and create land masses for real estate. Furthermore, he ensures that Superman won’t interfere in his schemes by developing a stock of Kryptonite. During Lex’s first attempts to create a land mass, there is a widespread power shortage in Metropolis, creating chaos and putting Lois and a shuttle mission in peril. Superman is able to save the day in spectacular fashion and has his first re-encounter with a less than impressed Lois.

Back at the Daily Planet, the competing news stories of the city-wide power shortage and Superman’s return become the focus for Lois, Jimmy and Clark. Following a lead and taking her son along with her, Lois correctly finds Lex Luther at the centre of the energy crisis plot and once again, is caught and at his mercy. As Lex’s grand plan unfolds, risking the lives of millions of people, Superman must again face his old adversary and save the woman he loves, no matter the costs to himself.

All of the above mentioned violent and scary scenes could scare or disturb children aged eight to thirteen, particularly the scene in which there are tidal waves and earthquakes in Metropolis, with innumerable accidents, gas leaks and fires.

Children over the age of thirteen years will cope better with the violence but could still be concerned by some of the more threatening situations and violence portrayed in the movie.

There are a couple of sexual references:

One scene in which Jimmy Olsen and Clark Kent go to a bar and there are patrons drinking there.

There is very little coarse language in this movie, including:

Superman Returns is an action adventure movie of good versus evil. Adults and older adolescents may enjoy the action sequences and special effects, the developing love triangle storyline, and picking up on the deliberate similarities between the current version and the 70s and 80s depiction of Superman.

The main messages from this movie are good triumphing over evil, and not being afraid to live up to your potential and purpose.