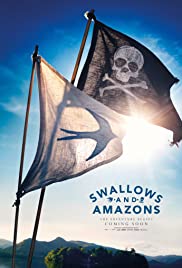 Not suitable under 8; parental guidance to 10 (violence, scary scenes, themes)

Swallows and Amazons is a 2016 film adaptation of Arthur Ransome’s classic children’s novel of the same name, first published in 1930. It tells the story of four siblings (aged approximately 7 to 16 years old) who are holidaying with their mother in the Lake District in England. They convince their mother that they are mature and responsible enough to take their little sailing boat out onto the lake and to a nearby island for a kids-only camping adventure. They soon discover that they are not alone on the island and there is another gang of siblings, the Blackett sisters. War is declared! The plot thickens when the children inadvertently become embroiled in the affairs of some Russian spies who have come to the island to hunt down Jim Turner, the Blackett sister’s uncle, who is hiding out on a boat. An exciting adventure full of drama and hijinks begins!

There is some violence in this movie including a fair amount of verbal threats, use of weapons and some destruction of property. Examples include:

There is some very mild name calling in this movie, including:

Swallows and Amazons is a family friendly period action/adventure film, set against the lush green backdrop of the English Lake District and is likely to appeal to most ages. Although it is based on the 1930s novel, parents should be aware that it has been pumped up with an espionage plot and some gun action, presumably to make it more exciting. This does mean that it is not as suited to younger audiences, particularly without parental guidance.

The main messages from this movie are that conflict is not always the best solution and that people are not always as they seem.