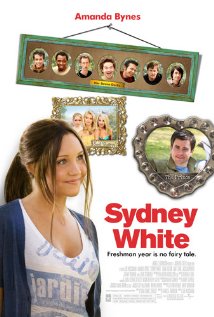 Not recommended under 8, PG to 13 (Sexual references, coarse language and teenage themes)

In this modern re-telling of the classic fairy tale, Snow White, young Sydney White (Amanda Bynes) begins her Freshman year at Southern Atlantic University where she innocently lays challenge to the resident “Queen” of popularity, Student President Rachel Witchburn (Sara Paxton).  Driven out of the sorority by Rachel, Sydney is forced into the company of seven  affectionately known  “dorks”. She nurtures and encourages them to rise up against Rachel and her Kappa sorority minions to improve life on campus.  Along the way, Sydney finds her true love as well as freedom of speech.

There is some slapstick style violence and accidental injury in this movie including:

Apart from the violence listed above, children in this age group are unlikely to be disturbed by anything in this film.

In addition to the above mentioned violent scenes, there are some scenes in this movie that could disturb children aged five to eight, including the following:

Sydney White is a modern day fairy tale based on Snow white and the seven dwarves. The main messages from this movie are that perseverance, friendship, loyalty and integrity will win over class and racial differences.

This movie could also give parents the opportunity to discuss with their children the importance of not changing yourself to gain the acceptance of others. Parents may also wish to discuss promiscuity and sexual relations with respect to social status and popularity.