Tad the Explorer: The Mummy Adventure 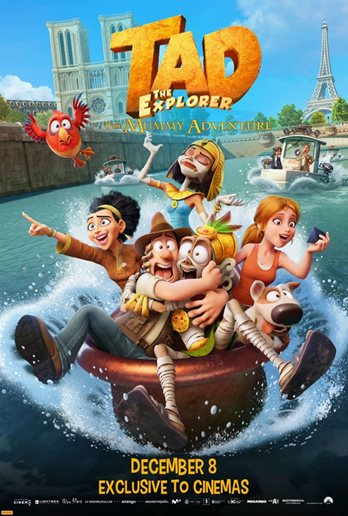 Not suitable under 8: parental guidance to 10 (violence, scary scenes and themes)

Tad the Explorer: The Mummy Adventure is the latest in a series of animated, comedy adventure films about aspiring but accident-prone archaeologist, Tad Jones. The film is Spanish, but dubbed in English.

The film opens with Tad (voice of Trevor White) working as an assistant on a dig in Mexico. In characteristic style, he accidentally opens a secret door and finds himself in a giant chamber where he makes the unlikely discovery of an Egyptian sarcophagus. When Tad reports his find, the professional archaeologists ridicule his report and he is fired from the dig – They then claim his finding as their own.

Determined to investigate further, Tad finds the sarcophagus in a museum and manages to open it, releasing an Egyptian mummy named Ramona (voice of Pippa Bennett-Warner) and unleashing a curse connected with a mysterious emerald tablet. To his horror, the curse transforms his friends from previous adventures – Mummy, an Incan mummy; Jeff the dog; and Belzoni the parrot – into strange creatures.

Pursued by crime fighters and the professional archaeologists, Tad and Sara (voice of Alex Wells) now go on an action-packed and dangerous quest to discover the emerald tablet and free their friends from the curse. They travel to Paris to find information from Napoleonic times hidden under the Louvre and then to Egypt. Along the way they meet up with Victoria Moon (voice of Elena Sanz), a researcher of the occult, who offers to help and follows them before becoming affected by the curse herself.

Archaeology; the Ancient World; the Supernatural; Curses and being cursed.

There are frequent scenes of violence and accidental harm in this movie, including:

Tad the Explorer: The Mummy Adventure (also known as, Tad the Lost Explorer and the Emerald Tablet) is an animated, comedy adventure suitable for older, primary school children and likely to also appeal to younger teens, but unlikely to have much appeal for older viewers. Scary scenes and themes, and violence make it unsuitable for under 8s.

The main message from this movie is that loyalty and friendship, as demonstrated by both Tad and Sara, are more important than fame.

Parents of younger viewers may need to discuss the two alternative endings we see in the film and the choice made by Tad.