Tad the Lost Explorer and the Secret of King Midas 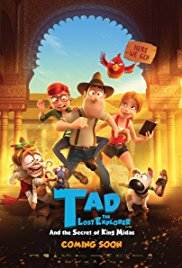 Not recommended under 8, parental guidance recommended 8-10 due to violence, scary scenes and themes

This movie is a Spanish animated feature that has been dubbed in English. It is the sequel to the original 2012 movie “Tad the Lost Explorer”. Tad (voice of Trevor White) has returned to his job as a bricklayer in New York City but now he is also an archaeology student with grand ambitions. He is head over heels in love with ‘star’ archaeologist Sara Lavrov (voice of Alex Kelly) and is looking for an opportunity to see her again and ask her to be his girlfriend. As luck would have it, Sara has recently uncovered an ancient scroll that is linked to the story of King Midas and she is in town to present her findings.

At the grand unveiling, the scroll is stolen right from under their noses by the villainous Jack Rackham (voice of Ramon Tikaram), who seeks to harness the power of King Midas and become invincible. Rackham kidnaps Sara, knowing that only she will be able to help him solve the mystery of the scroll. Tad is devastated and knows that he must save Sara.

Together with Sara’s assistant Tiffany (Gemma Whelan), his dog Jeff, and the comical ‘Mummy’ (voice of Joseph Balderrama) who has been exiled from an Egyptian tomb, Tad sets off to Spain to save Sara and win back the scroll.

There is a lot of animated violence in this movie including:

Tad the Lost Explorer and the Secret of King Midas is a formulaic romance-centred adventure story that is a bit like an Indiana Jones adventure. It is fast paced but it is also quite predictable with a fair few cultural stereotypes. Due to violence, scary scenes and themes, it is not recommended for children under 8 and parental guidance is recommended for the 8-10 age group

The main message from this movie echoes the message from the tale of King Midas, that love and human connection are more powerful than all the gold or wealth in the world.