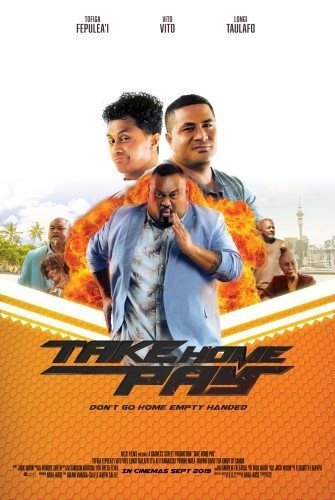 Not recommended under 10, parental guidance 10 to 13 (frequent physical fighting scenes)

Two brothers, Alama (Vito Aofaga Vito) and Popo (Longi Taulafo), work hard at their family's plantation in rural Samoa. Tired of their grumpy father's authoritarian style and earning little money, they set off to New Zealand as seasonal workers. At the end of a successful season of picking kiwi fruit, Alama wakes up to find that Popo has run away – and taken all of their money. Desperate not to return home empty-handed, Alama seeks help from his local Samoan relative, Bob Titilo (Tofiga Fepulea'i). Bob is in his 40s, unemployed and still lives with his mum but he is a self-declared "private investigator" and is determined to solve the case. His unconventional methods soon lead to an action-laden chase through Auckland and the beginning of an extraordinary friendship.

Take Home Pay is a heart-warming, upbeat and humorous action comedy with an excellent cast. A large portion of the film is in Samoan with English subtitles and gives a valuable insight into the simple life of traditional Samoan farmers as well as the Samoan/wider Polynesian community in New Zealand. It is a story about two young men going on an adventure which ends up being a journey of self-discovery, evaluation of dreams, and friendship.

The main messages from this movie are that you not only hurt others but also yourself when you are being selfish; that it is never too late to show remorse; and that you can learn from your mistakes to become a better person.