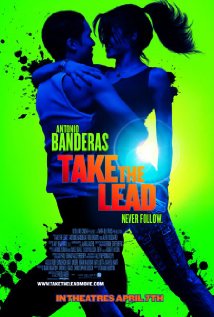 Take the Lead which is ‘inspired by true events’ tells the story of ballroom dancing teacher Pierre Dulaine (Anotonio Banderas) who started the ‘Dancing Classroom’ in New York inner-city schools. Dulaine is walking home one evening when he witnesses a vicious act of vandalism by a youth attacking a car with a golf club. Disturbed by what he sees Dulaine visits the youth’s school and offers his services to teach the students ballroom dancing. Tough principal, Ms James (Alfre Woodard) whose wall is adorned with photos of students who have died to remind her of her purpose, initially rejects his offer out of hand. However, upon reflection, she decides to take Dulaine up on his offer to teach the students in detention, thinking that this might actually act as a deterrent to detention.

Dulaine faces a tough group of kids such as Rock, (Rob Brown) whose brother is one of those on Ms James’ wall. He has to work to feed his family as his parents are constantly drunk, having never recovered from the death of his brother. Then there’s LaRhette (Yaya DaCosta), whose mother’s a prostitute and she has to go home every day to take care of her younger brother and sisters. These kids don’t mind their own style of rap and hip-hop dancing but are certain they don’t want to learn ballroom dancing.  Dulaine firmly believes that through ballroom dancing the kids can learn trust, self respect, team work and gain some dignity. He perseveres against the odds until one day Dulaine decides to bring in one of his professional female dancers to demonstrate how sensual and sexy ballroom dancing can be. This certainly makes quite an impression on the kids and their attitude changes from that point on. Dulaine even manages to persuade them to train for the 25th Annual Grand Ballroom competition which holds a money prize of $5000.

Children in this age group may also be disturbed or scared by the above-mentioned scenes.

Children aged eight to thirteen could still be disturbed by the above mentioned scenes particularly the disadvantaged lifestyle of the students such as Rock and LaRhette.

While young adolescents may not be too concerned by this movie, many could still benefit from some discussion of its content.

There is some reference to drug use in this movie, including:

Although the theme of Take the Lead has been done so many times before, it will appeal to lovers of ballroom dancing particularly, but to many others as well. The movie’s message is that self respect and a sense of self worth will go a long way in overcoming the difficulties produced by a disadvantaged background.

This movie could also give parents the opportunity to discuss with their children the issues of: