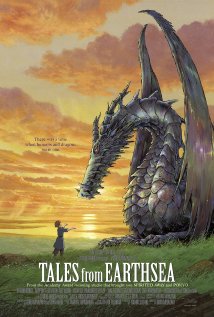 Arren, the son of the King of Enlad, flees the palace after committing a most heinous crime.  All around him the world is failing and two dragons fighting in the skies above bring with them the omen that the balance of the world is in danger of disintegrating.
Ged, the Archmage known as Sparrowhawk, is on a wandering quest to discover the cause of the peril when he meets with Arren in the desert two days walk from the city, Hort Town.  The city is a disheartening place full of merchant traders, drug addicts and a thriving slave market.  Through chivalrous efforts to save an orphan girl, Therru, from slavery, Arren meets her surrogate mother, Tenar.  Meanwhile, the party is being pursued by the wizard, Cob and his minion, Hare.  Arren himself has his own personal Shadow to contend with that haunts his dreams and waking moments alike.  Cob’s desire for eternal life becomes a greater need when he can use Arren and destroy Sparrowhawk in the process.

Children in this age group are also likely to be disturbed by some of the scenes mentioned above.

Children in this age group are may also be scared or disturbed by some of the scenes mentioned above.

There is no coarse language in this movie, although there are some abusive insults including:

Tales from Earthsea is a fantasy animation based loosely on Ursula K. Le Guin’s Earthsea series.  It is a Japanese film with English subtitles and has a strong anime feel to it as a result.

The main messages from this movie are that courage, a belief in yourself, friendship, and honour are important and that good always triumphs over evil.
Values that parents may wish to reinforce with older children include:

This movie could also give parents the opportunity to discuss with older children attitudes and behaviours, and their real-life consequences, including: