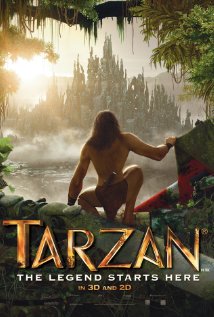 Tarzan is an animated adaptation of the classic story. It follows the tale of John, (Kellan Lutz), a young boy who loses both his parents in a helicopter crash and subsequently grows up in a band of gorillas, taking on an entirely new identity and the name of ‘Tarzan’. His parents had been investigating a mountain-sized meteor that had apparently hit the earth 70,000,000 years earlier, but died before concluding their work.

After being left on his own, Tarzan is adopted by a gorilla who has lost her own child. He grows up as part of the band, abandoning human speech and behaviours until a scientific explorer comes to the jungle in search of the meteor. The scientist’s daughter Jane (Spencer Locke) eventually runs into Tarzan, and the two begin to fall in love with one another.

However, greedy company men now working at Greystoke Industries – the company founded by Tarzan’s father – attempt to take over and use the power of the meteor for their own selfish gain. Clayton (Joe Cappalletti), the Greystoke CEO, captures Jane and her father, but has to battle with Tarzan as a result.

Nothing of concern in the film, but some associated merchandise

Insults such as “psycho”, beanpole” and “creep” used by children

Tarzan 3D, the latest telling of this classic tale, has not received critical acclaim, but is a heart-warming story that demonstrates the power of love as well as the devastation of loss. Tarzan loses his parents at a young age, and is again devastated when he believes he has lost his gorilla mother – the concept that humans and animals need a family is strongly presented within the film. After meeting Jane, Tarzan’s life is once again transformed by love.

Parents may wish to discuss several issues which arise from the film, including: