Teenage Mutant Ninja Turtles: Out of the shadows 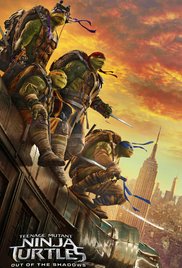 Not recommended under 13; parental guidance 13 to 15, due to frequent violence and scary scenes and characters

This film follows on from the 2014 TMNT film in which the evil villain Shredder was imprisoned after being defeated by the Turtles. In the new film we find the Turtles, Michelangelo (Noel Fisher), Donatello (Jeremy Howard), Leonardo (Peter Plaszek), and Raphael (Alan Ritchson) still hiding out in the shadows of the city’s underground sewer system. The Turtles stay out of sight by day while doing their vigilante work by night, as well as keeping their friend April O’Neil (Megan Fox) out of harm’s way.

Although Shredder ( Brian Tee) is still in prison, April has discovered that a scientist by the name of Baxter Stockman (Tyler Perry) has been secretly working for Shredder. Stockman  plans  to break Shredder out of prison while he is being transferred to a new prison. April tells the Turtles about Shredder’s plans but, even with the help of newcomer Casey Jones (Stephen Anell), they are unable to stop Shredder when he uses a teleportation device to make his escape.

It is up to the Turtles, April and Casey Jones to stop Krang from building his doomsday machine and destroying the planet.

The film contains action violence throughout.  There are many scenes of stylised fighting with punches and kicks to the head, chest and body and the film shows very few realistic consequences of the violence - no death, injury, blood and gore are depicted.  Examples include:

In addition to the above-mentioned violent scenes, there are scenes in this movie that could scare or disturb children under eight, including the following:

Children in this group are also likely to be scared by the above-mentioned scenes.

Children in this group may also be scared by some of the above-mentioned scenes.

There is also plenty of associated merchandise being marketed to young children.

The film contains some low-level coarse language and name calling that children may imitate throughout. Examples include:

There is also toilet humour involving flatulence and nose-picking

Teenage Mutant Ninja Turtles: Out of the shadows is the latest fantasy action adventure featuring the popular foursome. It is best suited to teen and adult fans of the series but is likely to attract younger children who like the associated toys. The film is not recommended for children under 13 and parental guidance is recommended for the 13 to 15 age group. It contains very frequent violence and scary scenes and characters. Because of this violence, it was originally classified M by the Australian Classification Board but, following an appeal, the Classification Review Board determined that the film should be classified PG.

The positive messages from this movie are about teamwork and acceptance of diversity, but the constant use of violence without showing realistic consequences also gives a very mixed message about the use of violence as a solution to problems. Parents may wish to discuss this with their children.