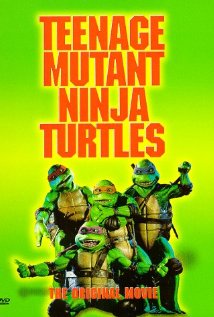 Brothers Leonardo (voiced by James Arnold Taylor), Donatello (voiced by Mitchell Whitfield), Raphael (voiced by Nolan North), and Michelangelo (voiced by Mikey Kelley) are mutant ninja turtles whose purpose is to work together to fight evil.

The story opens with a 3000 year old legend where a great warrior accesses a portal to the stars. This action allows him to live forever but as a consequence his army and his generals are turned to stone and 13 monsters are released on the earth.

We then move to the present where the people in a South American village are being intimidated and bullied by a group of soldiers who are supposedly protecting them from a ghost in the jungle. This ghost is Leonardo who has been sent by the sensei – Master Splinter (Mako) to learn about leadership but instead is secretly fighting the soldiers so that he can help the villagers.

April O'Neil (Sarah Michelle Gellar) arrives in the jungle looking for a rare and ancient stone statue for a rich collector – Max Winters (Patrick Stewart). While there, she finds Leonardo who is an old friend and tries to persuade him to come back as his brothers don’t seem to have a purpose and they need him to help get them working as a team again.

Leonardo returns to New York and finds two of his brothers trying to be good citizens by doing everyday jobs and Raphael who sleeps all day but secretly becomes a vigilante at night and catches criminals. Casey Jones (Chris Evans) who is April’s boyfriend discovers Raphael’s true identity and occasionally helps him with his vigilante work.

In the meantime April and Casey deliver the statue to Max Winters who turns out to be the warrior from the opening scenes. He is collecting the stone generals in an attempt to reassemble his military team and rid the earth of the 13 monsters. However to achieve his final goal he needs the help of the turtles.

Children of this age are unlikely to be disturbed by anything in this film.

There is no course language in this movie, although there are putdowns and standard turtle expressions such as “Cowabunga!”.

TMNT is a computer-generated martial arts adventure aimed at children which features familiar heroes. The main message of the film is that not everyone can be a leader and that everybody has a part to play in a team. Values in this movie that parents may wish to reinforce with their children include teamwork, trust in others and loyalty.

Parents may also like to use the movie to discuss the view that problems are not always solved by violence.