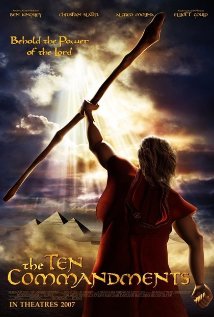 Not recommended under 5, PG to 8 (Violence, scary scenes, themes)

The Ten Commandments is an animated retelling of the Biblical story of Exodus where the Hebrew prophet, Moses (brought up as an Egyptian) is chosen by God to lead his people out of slavery in Egypt to the Promised Land where they can live in freedom. It features the voices of Ben Kingsley (narrator), Christian Slater (Moses), Alfred Molina (Ramses) and Elliot Gould (God).

There is very mild sexual activity in this movie, including:

The Ten Commandments is a computer-generated animation depicting the historical and Biblical account of Moses’ exodus from Egypt to the Promised Land.

This movie could also give parents the opportunity to discuss with their children the importance of reviewing historical texts first-hand, the nature and intent of slavery, racism, and infanticide, magic, supernatural events, violence, rebellion, murder and deception, idolatry, ungratefulness, anger, and impatience.