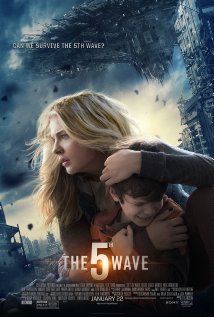 When aliens invade earth and kill off most of the population in four deadly waves of attack, Cassie (Chloe Moretz) must learn how to survive on her own. Cassie is separated from her family and she is desperate to reunite with her younger brother Sam (Zackary Arthur). When the aliens injure Cassie, Evan (Alex Roe) nurses her back to health and agrees to help her find Sam. But when the aliens look the same as the humans, who can Cassie trust as she prepares for the lethal 5th wave?

Natural disasters; end of the world; children as victims; death of a parent; aliens

The 5th Wave is a confronting but exhilarating action movie, based on a young adult novel, that examines what it means to be human. It is not recommended for viewers under 14 due to disturbing themes and scary and violent scenes. Parents of younger children may also be concerned by the coarse language in the film.

The main message from this movie is that it is our hope that makes us human.

This movie could also give parents the opportunity to discuss with their children the importance of independent thought and not blindly following orders.