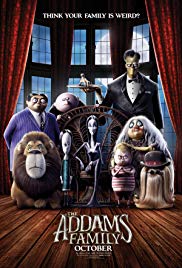 Not suitable under 7; parental guidance to 10 (Violence and themes)

When an angry mob of townspeople crash Morticia (voice of Charlize Theron) and Gomez’s wedding, Gomez (voice of Oscar Isaac) promises to find a place where they can live in peace and safety without having to worry about the wrath of those who do not understand their values or way of life. After the car they are driving accidentally hits Lurch (voice of Conrad Vernon), he leads them to a haunted and derelict insane asylum. The couple are pleased to learn that it is both deserted and isolated and quickly decide to make it their family home. Thirteen years pass while they live in the mist of seclusion on the top of a hill. Unable to see beyond the gates of their property, daughter Wednesday (voice of Chloe Grace Moretz) longs to know what lies beyond. When Margaux Needler (voice of Allison Janney), a reality TV show renovator, revamps the town at the base of the hill, she also drains the swamp and clears the mist that has hidden the Addams’ house from view. Margaux is also determined to renovate the Addams’ home in order to stop the value of her development from falling. However, when her plans go awry and the rest of the Addams family, including Cousin It (voice of Snoop Dog) and Uncle Fester (voice of Nick Kroll), arrive to celebrate Pugsley’s (voice of Finn Wolfhard) coming of age, she decides to turn the whole town against them. Ultimately it is the children who demonstrate to the adults that sometimes our greatest strength lies in our differences.

Death; extreme sibling conflict; use of spying; accepted use of stealing and cheating; portrayals of risky behaviour; rebellion; strategic use of weapons; bullying; the pitfalls of social media.

The Addams Family is a macabre animation. While not particularly scary there are a number of creepy scenes and some potentially influential, dangerous messages that parents should be aware of. This film will best be enjoyed by older children and slightly more mature audiences.

The main messages from this movie are to be true to yourself and to acknowledge and develop personal talents even when they do not conform to normal parameters or traditions.