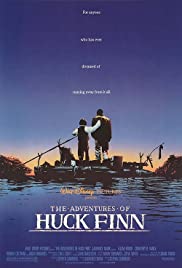 Huckleberry Finn (Elijah Wood), the semi-literate son of a frightening alcoholic father Pap (Ron Pearlman), runs away from home after faking his own death. With an escaped slave called Jim (Courtney B. Vance), the two runaways follow the Mississippi River to freedom in the slavery-free state of Illinois. Along the way, Huck and Jim encounter adventure, shipwreck, swindles, love, and death. As the duo deal with the arrival of The King (Jason Robards) and The Duke (Robbie Coltrane), two conmen impersonating British family of the wealthy Wilks sisters, Huck and Jim face continued threats to their freedom and their lives.

Death of a parent, children as victims, racism, slavery, alcohol dependence, gun violence, stealing and scams, pretending to dabble in the occult.

The Adventures of Huck Finn is a Disney remake of the classic Mark Twain novel of the same name. This film is an enjoyable and easy watch with strong performances from Elijah Wood as Huck and Courtney B. Vance as Jim. The story deals with themes and sequences that may be distressing to children (particularly the threats of harm to children and racism toward African American people), and loses much of the gravity associated with the racist themes of the original story due to the removal of the racial language. Due to violence, frightening sequences, and themes dealing with racism, The Adventures of Huck Finn is not suitable for children under 8 and parental guidance is recommended to 13.

The main messages from this movie are that people can learn to accept others as equal, even if others disagree, and that loyalty and support from friends is important, even for the most self-sufficient people.