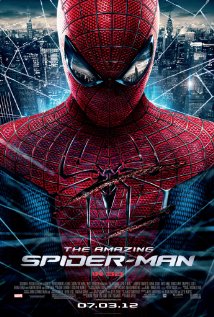 Not suitable under 13, PG to 15 (Violence, Disturbing scenes, Themes)

Peter Parker (Andrew Garfield) is a teenager enrolled in Midtown Science High School. Since the death of his parents in a plane crash, Peter has been brought up by his Uncle Ben (Martin Sheen) and Aunt May (Sally Field). Peter has a huge crush on classmate Gwen Stacy (Emma Stone).

Peter has a number of unanswered questions relating to his parents’ death, and while searching his uncle’s attic, discovers secret research files together with a photograph of his father’s partner Dr Curt Conner (Rhys Ifans) hidden in an old briefcase. The files and photograph lead Peter to the pharmaceutical company Oscorp.

After bluffing his way into the Oscorp building and a meeting with Dr Conner, Peter ends up in a laboratory filled with genetically modified spiders and is bitten. On the way home, Peter suddenly begins to developed spider-like superpowers - he is faster, stronger, more agile and able to climb walls like a spider. Peter begins to work onthese new-found powers, but tragedy strikes when Peter’s Uncle Ben is shot and killed by a thief.

Meanwhile back at Oscorp, Dr Conner, an amputee,has been busy making a serum which he hopes will enable the human body to heal itself of any illness and even regenerate new limbs. As a result of pressure from his employer to test his serum, Dr Conner injects himself and things quickly go wrong. Conner mutates into a giant Lizard-Man and goes on a rampage, causing mayhem and destruction through busy city streets.Peter/Spider-Man now risks all in a quest to stop the Lizard-Man.

The Amazing Spider-Man contains highly stylised superhero action violence (at times brutal), some depiction of blood and gore and some schoolyard bullying. Examples include:

There is also a lot of associated Spider-Man merchandise.

Gwen sends her father away by suggesting that she is behaving in an irrational manner because of her period - mentioning “cramps, lots of blood and vomiting.”

The film contains some partial nudity and sexual activity, including:

The Amazing Spider-Man, based upon Marvel comic book characters, is superhero action adventure suited to an older adolescent and adult audience. The film is emotionally intense with violent and disturbing scenes that make it unsuitable for younger children who might be attracted by the Spider-Man character who they have seen as a toy or fancy dress costume.

Those who have great talents have a responsibility to use them to help others.

Selflessness, compassion and empathy as demonstrated by Peter when he rescues a young boy from a burning car.