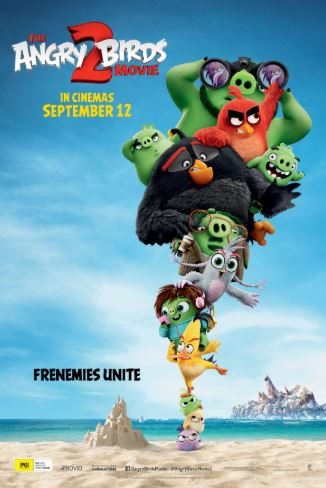 Wanting to maintain his hero status, Red (voice of Jason Sudeikis) is keen to agitate the wars between Bird Island and Piggy Island. Red and his friends, Chuck (Josh Gad) and Bomb (Danny McBride) need to protect their island from piggy pranks. Leonard (Bill Hader) leads his piggy friends in the constant bombardment of objects dropped onto Bird Island. However, when a new threat emerges in the form of Zeta (Leslie Jones), an unhinged, psychotic female eagle intent on destroying both Bird and Piggy Island, Leonard and Red must form a truce to fight together.

Eagle Island is a frozen volcano and, with the aid of her eagle soldiers, Zeta invents a frozen ice ball, filled with volcanic lava, that can be shot out of a super weapon to set both Bird and Piggy Islands on fire. Red and Leonard form a small band of warriors and together with the intellectual guidance of Chuck’s sister Silver (Rachel Bloom), devise a plan to destroy the super weapon. In the process Red learns some important lessons.

The Angry Birds Movie 2 is an animated comedy that will appeal to Angry Birds fans. It does have some adult concepts however, and a lot of slapstick violence. It is therefore not recommended for under 5’s and parental guidance is recommended for 5–7 year olds.

The main messages from this movie are that ‘we are strongest when we band together’ and that actions create consequences.