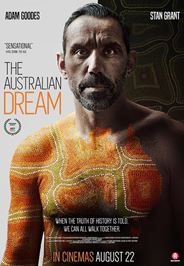 Not recommended under 15 and parental guidance to 18 (coarse language, themes and confronting social issues)

The Australian Dream recounts the life story of footy legend Adam Goodes. With a Scottish father and an Aboriginal mother who was taken from her family and knew little of her roots, it wasn’t until adulthood that Adam began to learn about his cultural identity and build an understanding of who he is and where he came from. Adam was mentally very strong and believed that the harder he worked the more he would improve. This philosophy led him to earn 2 Brownlow medals and helped him lead the Sydney Swans to victory for the first time in 72 years. Adam became a source of pride for Aboriginal communities all over Australia, however, being in the public eye highlighted how people are not all treated the same. As Adam began to experience racial vilification, what he loved about the game slowly began to change. Adam had to smooth over ruffled relations and publicly accept apologies from ‘professionals’ who continued to behave poorly. Adam also had to tolerate hurtful comments from both players and spectators but when a young teenage girl shouted, “Goodes, you’re an ape!” during one of his games, he decided enough was enough. Making a stand, Adam began using his prestige as a platform for highlighting injustice and racism and starting conversations addressing these issues. The social media storm that followed would have devastating consequences. Left unchecked, the animosity of the crowds who continued to “boo” Adam for standing up for Aboriginal rights truly began to affect him. Ultimately, the relentless insults and hostility resulted in one of the best players Australia had ever seen leaving the footy field. Adam headed home to a place where he could heal, where he was loved and accepted and where the spirits of his ancestors could lift him up again and help him find the strength to continue to stand up for what is right and to educate and inspire others by the difference his example has made.

Breaking down barriers, racism, the Stolen Generation, connection between heritage and identity, injustice, footy culture, the personal impact of harassment on individuals.

It is unlikely that children over the age of thirteen would be frightened by anything further in this movie.

The Australian Dream is an eye-opening documentary providing a behind-the-scenes look at the rise of Adam Goodes and the battles he fought against racism, injustice and the suffering of the Aboriginal community both on and off the footy field. The messages are powerful and the story is well woven. The confronting social issues and the past and current sufferings that Aboriginal communities continue to endure deserve consideration through discussion and offer important lessons for us all, however, this movie is not recommended for younger viewers.

The main messages from this movie are that no matter who you are or how mentally strong you might be, words have the power to hurt; home has the power to heal; the ‘Australian dream’ is rooted in racism; and as a society we need to stand together against injustice, hatred and cruelty.