Beatles: Eight Days a Week, The - The touring years 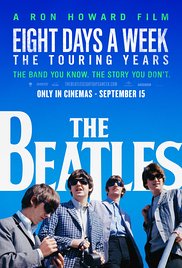 The film is a documentary featuring the Beatles’ touring years between 1963 and 1966. We learn how the band’s four members - Paul McCartney, Ringo Starr, John Lennon and George Harrison - met and formed the band, and what their musical influences were. The film follows the band from their historic 1964 appearance on the Ed Sullivan show and their tour of 166 concerts across 15 countries around the world.

Through interviews of film and music superstars including Elvis Costello, Eddie Izzard, Whoopi Goldberg, John Savage, Howard Goodall and Larry Kane, we learn what the Beatles meant to the public and the impact that ‘Beatlemania’ had on the culture of the day.  The film also shows the toll that touring and fame took on the band members.

Popular music; the culture of the 1960s, fame and being famous

The film contains some violence related to crowd hysteria and occasional racial violence and tensions. Examples include:

The film contains scenes of mass hysteria with young woman hysterically crying and screaming. Young women collapse and are carried out of concerts by police, ambulance attendants and the general public.

The Beatles Eight Days a Week - The Touring Years is a documentary that tells the story of the Beatles’ touring years from 1963-1966. The film features some never-before-seen footage of the Beatles that die-hard fans will want to see, as well as remastered sound and visuals. As an extra bonus, the version released for cinema contains thirty minutes of digitally remastered footage of the Beatles’ famous 1963 concert at Shea Stadium New York where they performed to over 55,000 people.

Some scenes of mass hysteria and racial unrest may disturb younger children, and parents may be concerned about some of the coarse language, scenes of smoking and drug references. The film is therefore not recommended for children under 12.