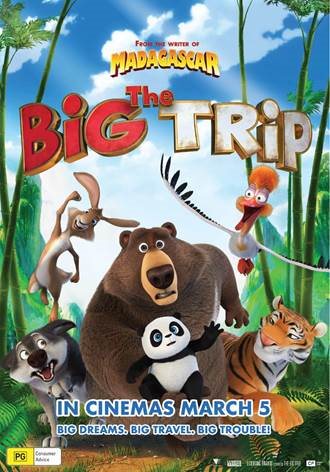 Not suitable under 5; parental guidance to 8 (violence, scary scenes)

Mic Mic (voice of Pauley Shore) is a grumpy grizzly bear who is quite content to live alone on the edge of the forest. When an inept stork accidentally delivers a baby panda to his gate, Mic Mic decides to set off in search of the panda’s rightful parents. As luck should have it but much to Mic Mic’s displeasure, an unfortunate rabbit named Oscar (voice of Drake Bell), who seems to encounter no end of trouble, decides to tag along. The unlikely pair are soon joined by Duke (voice of Stephen Thomas Ochsner) a flamboyant pelican who can’t stop talking; Amur (voice of Joseph Sell) a poetic tiger; and Janus (voice of Danila Medvedev) a lone wolf who journeys through life constantly paralysed by fear. As the group journey in search of the panda’s parents, they must keep the baby safe from the perils they encounter, particularly from an evil and dangerous snake bent on revenge. Soon the unlikely companions come to realise there is strength in numbers, that courage can come even from the most fearful and that friendships can be formed through adversity and adventure.

Separation of a baby panda from its parents, revenge, overcoming fear.

The Big Trip is a Russian, animated adventure with good graphics and quirky characters. While this film is aimed at a family audience, the violence and scary scenes warrant it unsuitable for children under 5 and parental guidance is recommended to 8. Furthermore, the fairly predictable plot may lack interest for older children. The film will therefore, likely be most enjoyed by children around nine.

The main messages from this movie are to believe in yourself, to complete what you start and that friendships can be found in the most unlikely places.