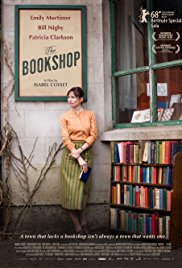 Not recommended for under 13 due to lack of interest and scenes that may disturb or frighten very young children.

The independent and free-thinking war-widow Mrs Florence Green (Emily Mortimer), makes a decision to open a small bookshop in the sleepy seaside town of Hardborough, England. She soon discovers that her humble dream has become a small social-revolution, pitting progressive liberal values (Florence and her choice of novels) against conservative and traditional values (embodied in the lady of the town, Mrs Violet Gamart (Patricia Clarkson)).  With the unlikely friendship of the private Mr Edmund Brundish (Bill Nighy) and the outspoken book-hating Christine (Honor Kneafsey) Florence must defend her right (and responsibility) to provide the town with books and the freedom to read them.

Death of spouse; sexism toward women

There is some violence or reference to violence in this movie including:

There is nothing of concern for this age group.

The Bookshop is a wistful film adaptation of Penelope Fitzgerald’s novel of the same name.  While beautifully made and with performances that provide genuine drama, the story itself lacks the coherence and subtlety of the political commentary of its namesake The Bookshop. Some adults and older children (13+) may find the film entertaining – melding Isabel Coixet’s reflective European direction with English melancholic humour.