Cave of the Yellow Dog, The 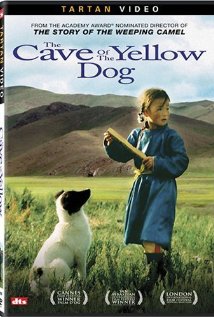 Not recommended under 8, PG to 13 (Distressing scenes. Themes)

Six-year-old Nansal (Nansal Batchuluun) has just returned to her family’s campsite for the summer after months away at school. After a warm reunion with her mother (Buyandulam Daramdadi), father (Batchuluun Urindorj), younger sister (Nansalmaa Batchuluun) and baby brother (Babbayar Batchuluun) she is off to collect dried dung for the fire, a task she has never done before. The rosy cheeked six- year old sets out into the wilderness and returns not with a basket full of dung but with an energetic young dog whom she found hiding in the back of a cave.

Determined to keep the dog, even if it means hiding him from her father, Nansal goes about her daily life, helping with the chores and looking after her siblings. When wolves kill a couple of the family’s sheep, her father journeys into town to sell their hides. Before he leaves he says that the dog must not be there when he returns. He is worried that if the pup was raised by, or was in some way associated with the wolves, then they would follow his trail and decimate their herd.

Nansal only sees goodness in the pup, which she calls Zochor (Spot), but must face the possibility of losing him rather than disobeying her father’s wishes.

There is some predatory violence in this movie, listed in the following section.

There are some scenes of predatory violence in this movie that could scare or disturb children under the age of five, including the following:

In addition to these scenes, there are some scenes in this movie that could scare or disturb children under the age of five, including:

There are no other scenes in this movie that would upset children of this age, but some of the scenes described above could be scary for some children at the younger end of this age group or for those susceptible to its themes.

There is some no nudity or sexual activity in this movie. However, there are a couple of occasions where quite innocent images of the children partially naked are shown.

The Cave of the Yellow Dog is a sub-titled documentary style film detailing the daily life of a nomadic, Mongolian family over one summer. Set against the breathtaking backdrop of the unspoilt Mongolian wilderness and simply told, often from a child’s perspective, the film provides a unique view of a way of life that is rapidly disappearing. By nature the film will appeal to a more mature, thoughtful audience, but the film’s simplicity and child-centeredness will make it appealing to some younger viewers as well.

The main messages from this movie are respect for the earth and its creatures and especially respect for the cultures that share it. The film also demonstrates how there is great richness in simplicity.

This movie could also give parents the opportunity to discuss with their children the importance of being tolerant and appreciative of other people and their lifestyles. The film shows a completely different way of life and while it doesn’t explain all the customs, it shows their daily use in life and their importance to the people that practise them.